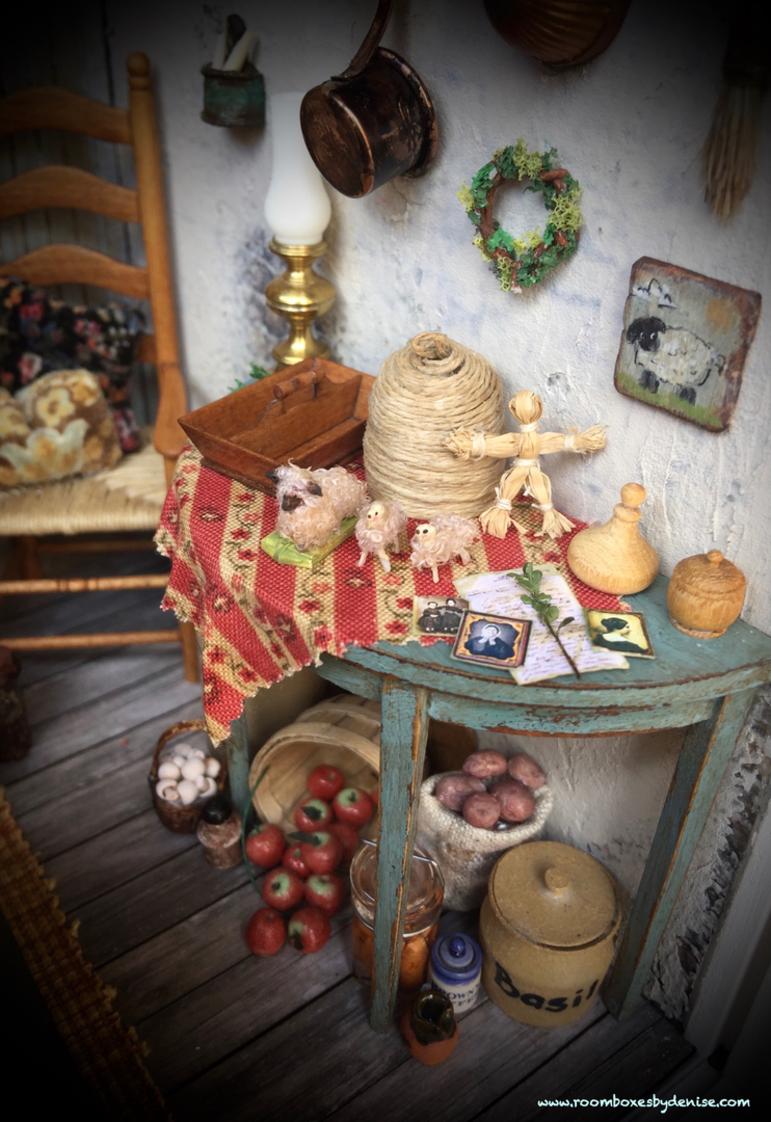 Here is how I made the "hooked rug" lamb wallhanging seen on the left:  I found a simple punch needle embroidery colored picture and printed it onto copy paper.  Then I cut 1 mm widths of "pulled" or unraveled bunka in similar colors and laid them on top of photo.  But first, put a layer of glue (ex. Tacky) on the section of the photo to be covered, then put the bunka on top using a toothpick. Every now and then you can tap the bunka down on the picture with your finger to flatten it a little. To make very narrow lines in a picture, like the black legs of the lamb, I put a tacky-type glue on a strand of pulled bunka and gently pulled the glue through the strand to straighten and make the bunka more narrow.  Then cut the strand to the size lengths that are needed.  Think of coloring the picture instead of with paints or crayons but, with bunka---a very simple process.  I made the frame around the picture using a long pulled strand of the bunka.

On the left, the divided wooden tray was a show purchase. The two David Krupick wood jars on the right were the ones I used to make a mold of and then made bottles using the clear epoxy resin.  The primitive bee skep was made with a narrow hemp cord that was glued over a Saran Wrap covered glass dome which was used as the form.  Important:  here is what NOT to do!!!!  Do not cover the glass dome form with Press 'n Seal Saran Wrap, use regular plastic wrap, because the skep stuck to the dome and I had to laboriously pull the skep off the form, misshaping it in the process.  But the skep looks OK in this scene because the theme is primitive.  Next to the skep is a corn husk doll which was taught in a class by Tina Squire. 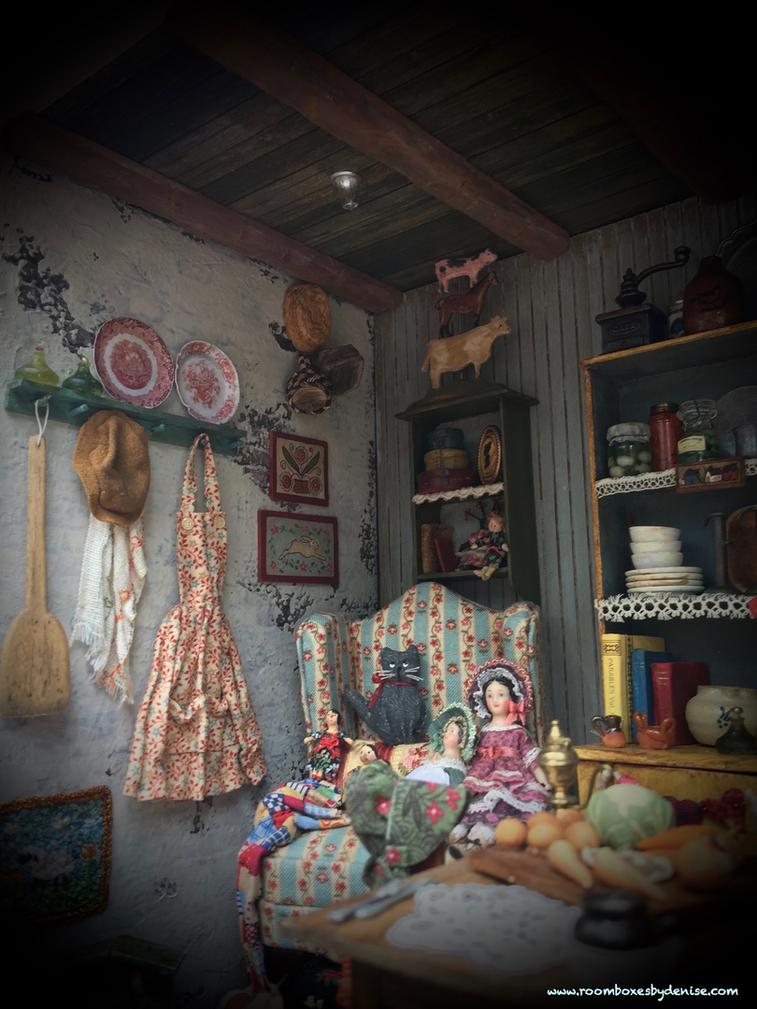 The rabbit wall hanging, seen above the chair, was done the same way as described for the lamb wallhanging with the snippets of bunka.

Quick One Minute Candles seen in the teal blue candle box below the painting:

Snip about 2 mm off  the pointy tip of a toothpick and discard tiny tip.  Paint two coats of gel-like nail polish on the toothpick as long as you wish to make the candle.  Let dry between coats of polish.  Then cut off the toothpick and your candle is complete.

A fellow club member, Tina Squire, prompted our club to do a Hitty doll vignette because she had made each of the group members porcelain Hitty-like dolls in two sizes.  Privately, I was not particularly enthused with this idea because I had just finished a large doll box and I wanted to create something else besides dolls.  But instead of voicing my reluctance, I decided to do some research on the origins of Hitty dolls. Upon discovering that a children's novel, "Hitty, Her First Hundred Years," written in 1929, described the adventures of  an early American hand-carved doll during the 19th century, my mind began to visualize a room box with pioneer and primitive decor.  Creating a box using primitive and country accessories had been an idea floating in my head for a very, very long time.  Consequently, I can scratch this idea off my long list of projects to complete. . . . . . or maybe not!  While completing this box, I began visualizing a Christmas country kitchen, a country mouse house, and contemporary country family room.  Regardless of whether I do any of the above boxes, one thing is certain, I would like to incorporate more folk art miniatures in future boxes because they are very satisfying to complete.  Box completed in November 2016. 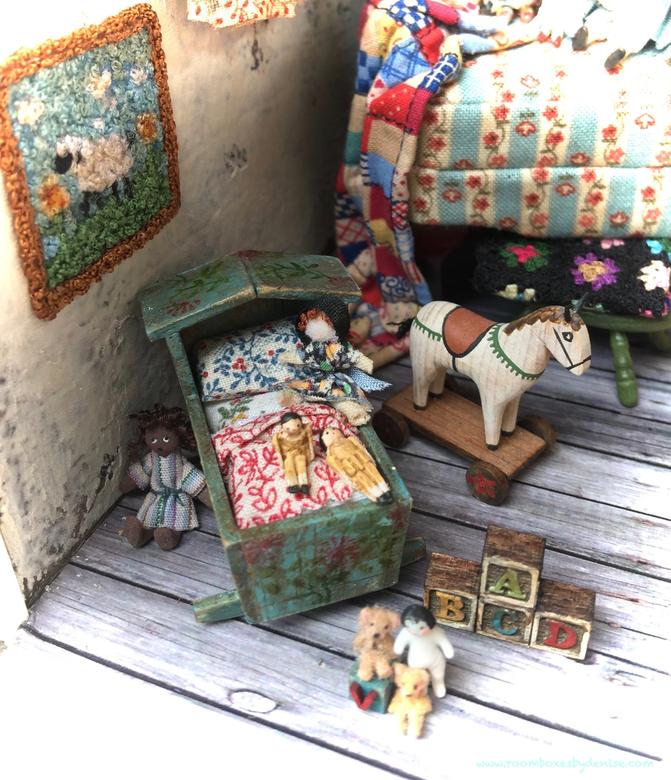 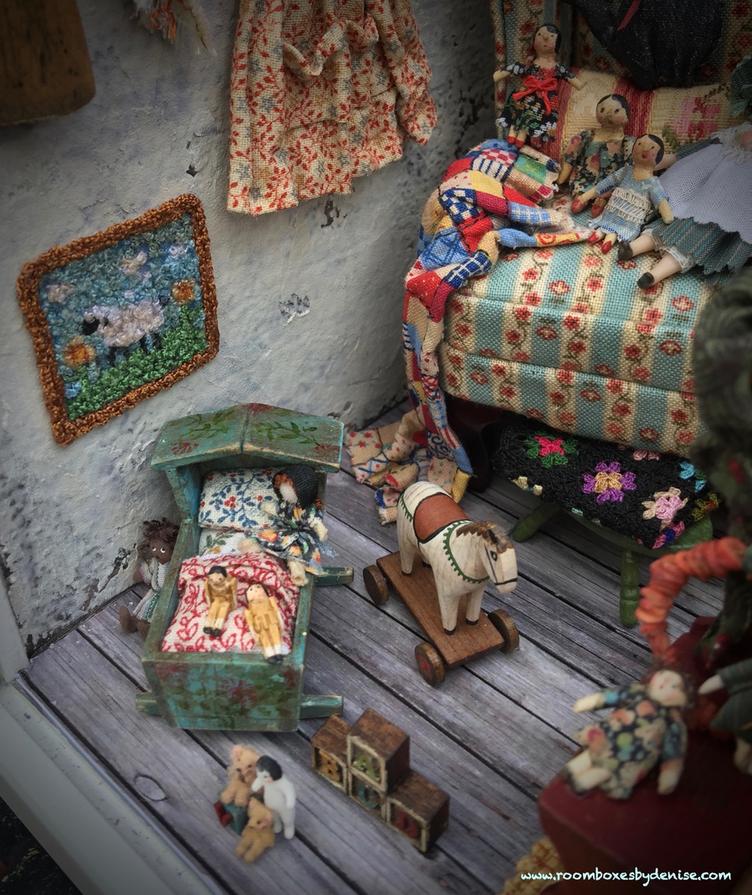 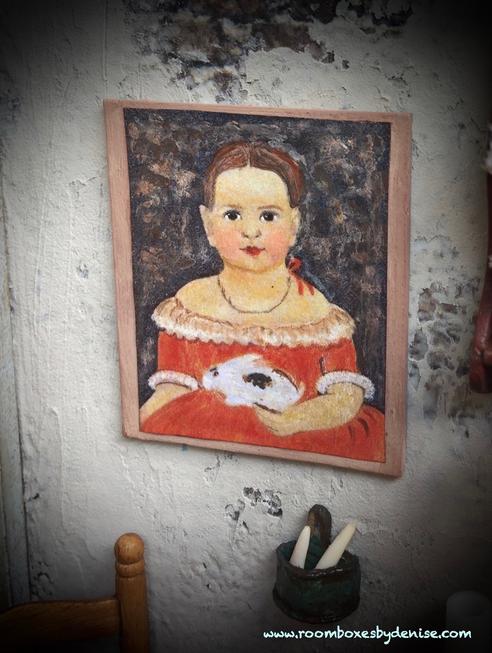 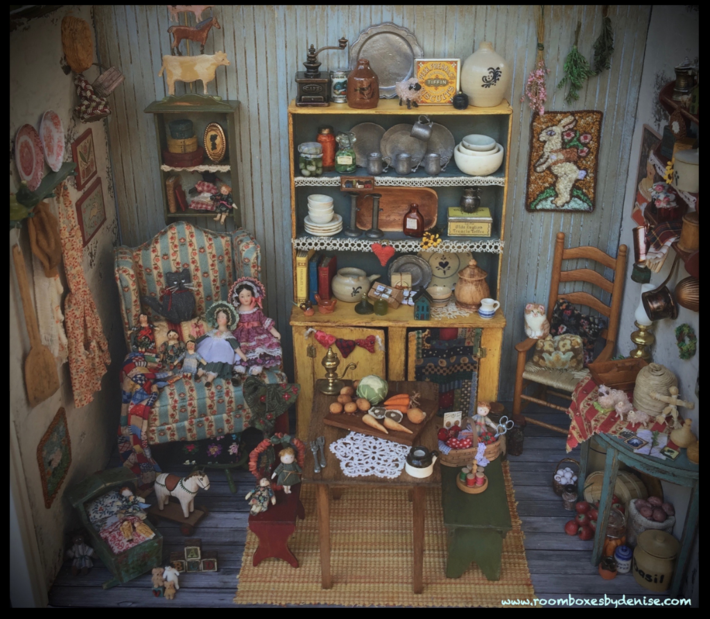 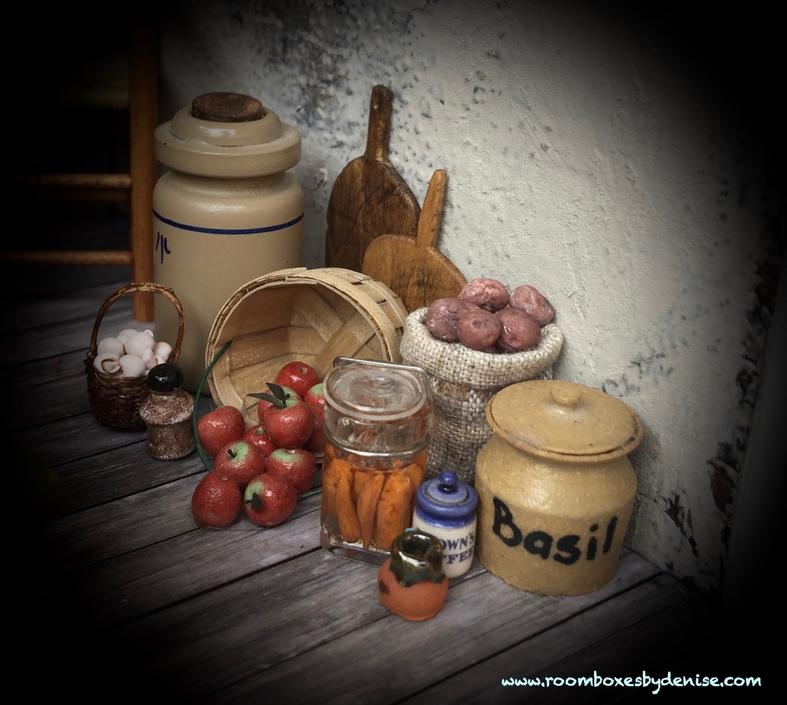 The Irish 1/2" scale cradle was a Jane Harrop kit from the UK.  I wanted to stencil it but had no success with my mini stencils, so I stamped the wood with tiny rubber flower stamps that I had purchased at a doll show. 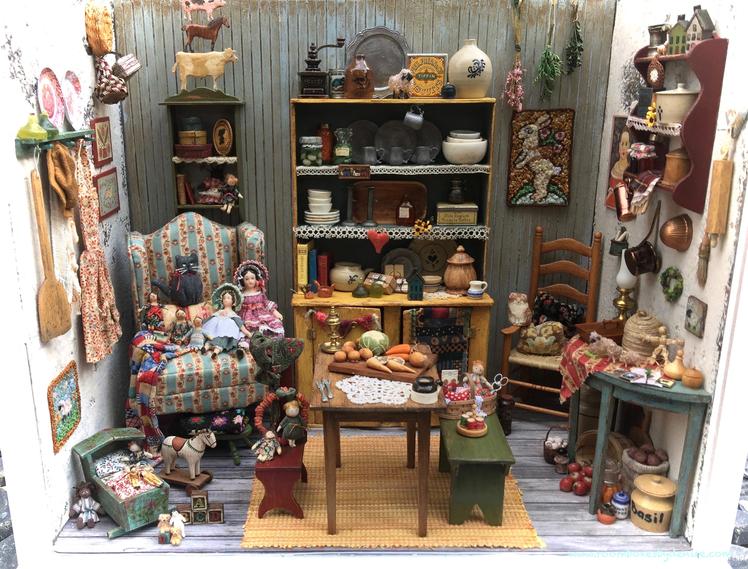 Fresh produce is stored under the half circle table.  The miniature with the apples spilling out of the basket was signed LL '88 for Lyn Latimer.  The mushrooms, potatoes and carrots were made with Fimo. 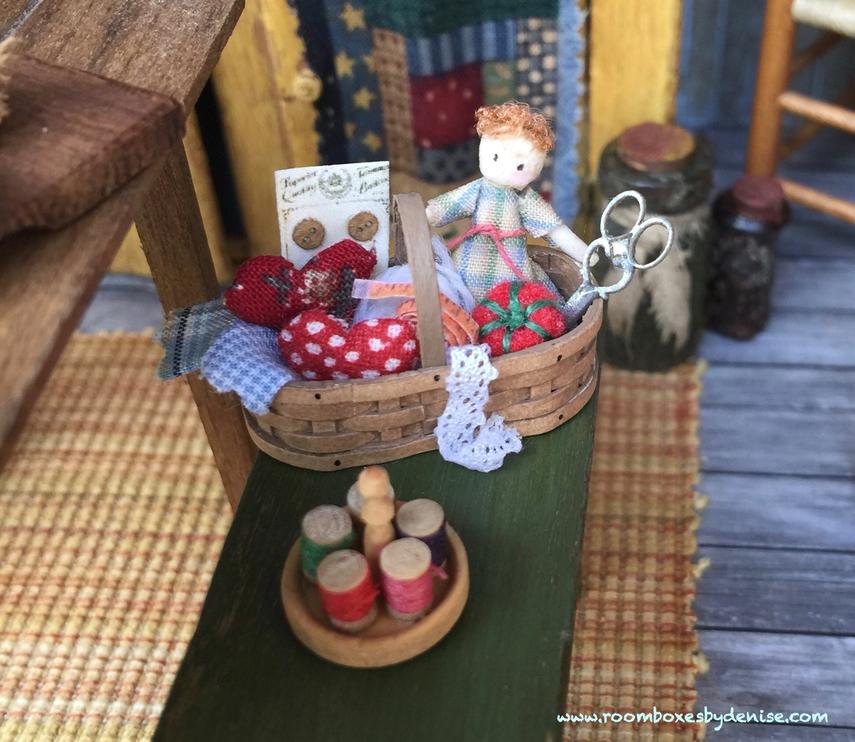 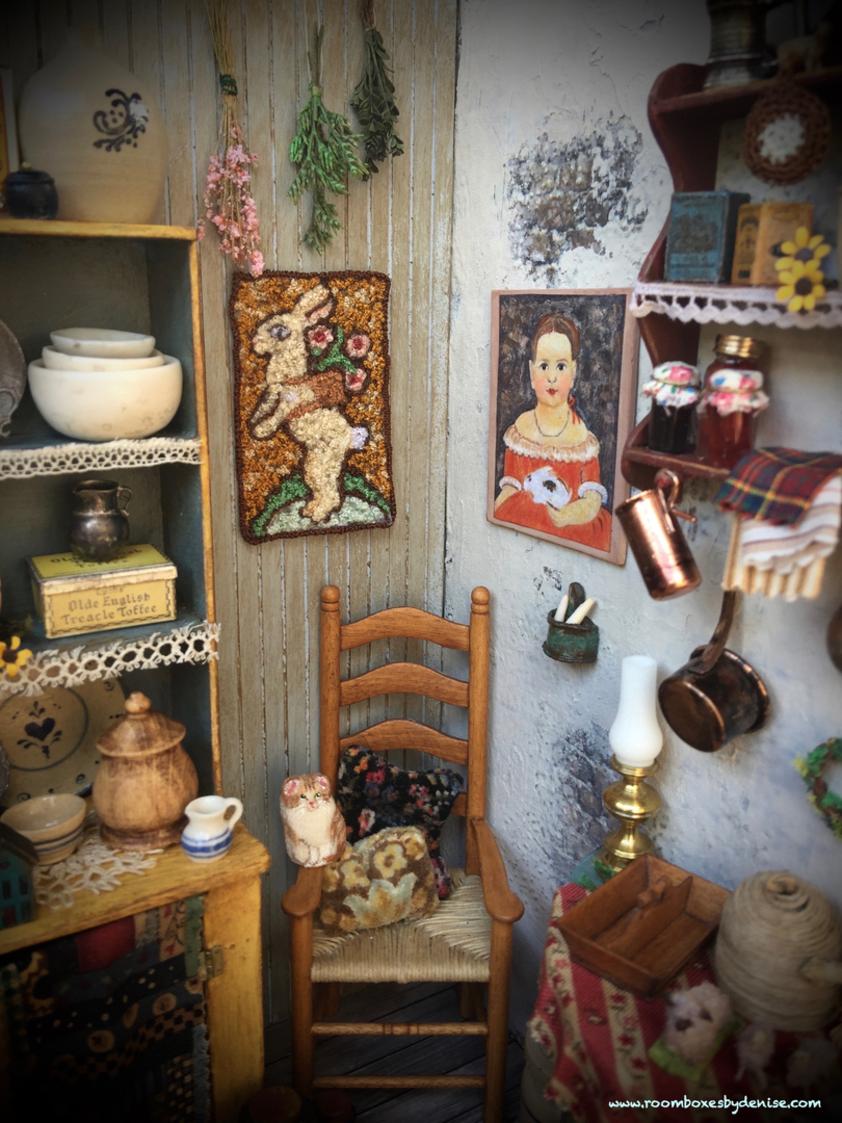 To make the very simple brick and stucco wall, I bought on ebay these sheets of bumpy brick walls and covered them with matte opaque texture paste by Ranger using  a plastic palette knife.  I spread a very thin coat of this very lightweight texture medium, that had been mixed with a little chalk paint, on the brick paper rubbing it off here and there with a paper towel and skipping over some parts altogether so the brick peeked through the stucco.  Super easy!

The larger sheep was part of a set purchased at a train store. Snippets of white bunka were glued onto the body and then dampened with a wet paintbrush with a small amount of Gail Wilson's overdye on the tip of the brush to give it a weathered-look. When a small amount of water is applied to the bunka, the fibers get released leaving a wispy wool-like texture. The smaller lambs were made from molds and air dry clay.  Small wire was used for the legs and tiny pieces were poked and glued into the body of the lambs.  Tintype photos and a painted twig were glued on top of an aged letter. 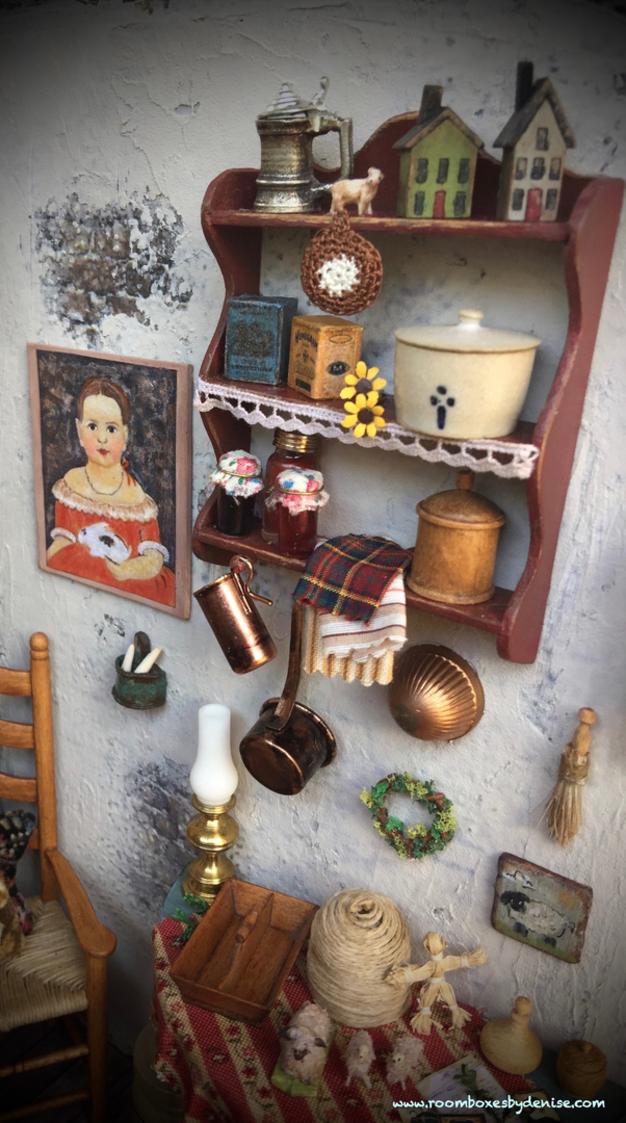 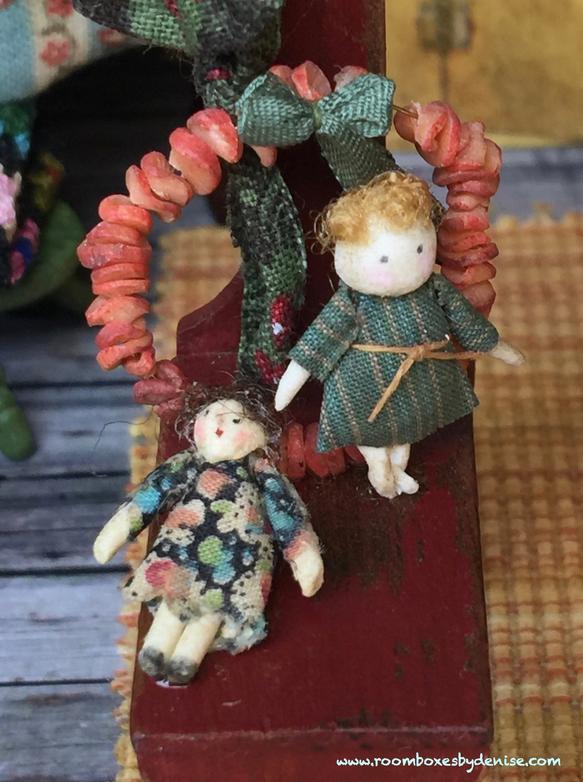 A Room with a "primitive" View

This exquisitely finely tatted doily and cutting board with vegetables were purchased at a show years ago.

The two porcelain "Hitty" dolls on the right, made by Tina Squire, were the catalyst for this primitive themed room box.  Five of the other club members and myself each dressed these dolls in different ways. Paulette Svec made each of us these sewn and stuffed cats and we modified them to our own unique styles.  I made the 3 smaller wooden dolls using an air dry epoxy wood putty.  To make the quilt, I used a piece of fabric with a perfectly scaled quilt pattern and sewed a very thin fleece-like fabric to the backside while outlining the quilt blocks with black sewing thread. Then I glued aluminum foil to the backside which allowed the quilt to be easily manipulated to create a flowing and drapey-looking quilt.

The stacked shaker boxes were made with bingo token game pieces and smaller wooden circular plugs. I then covered these rounds with a wooden veneer tape that was then painted with chalk paint and weathered with alcohol ink.  I marked the nail holes with a black micron pen. 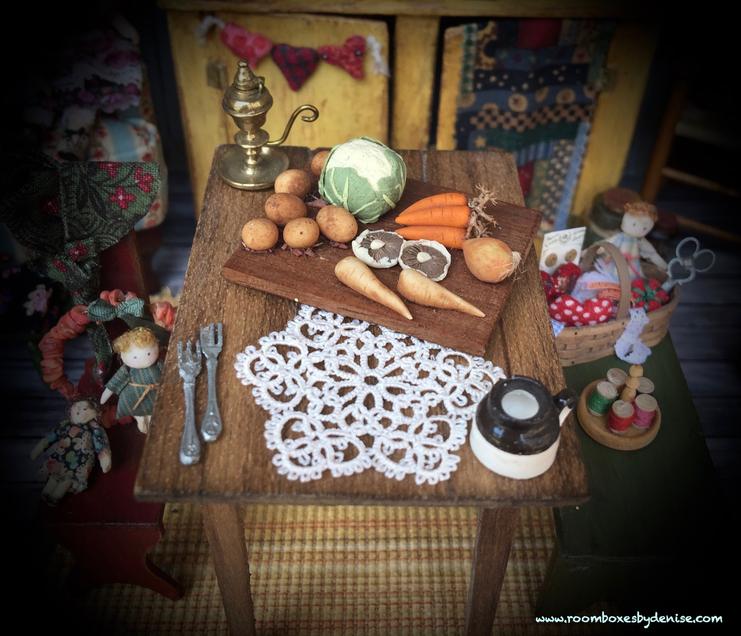 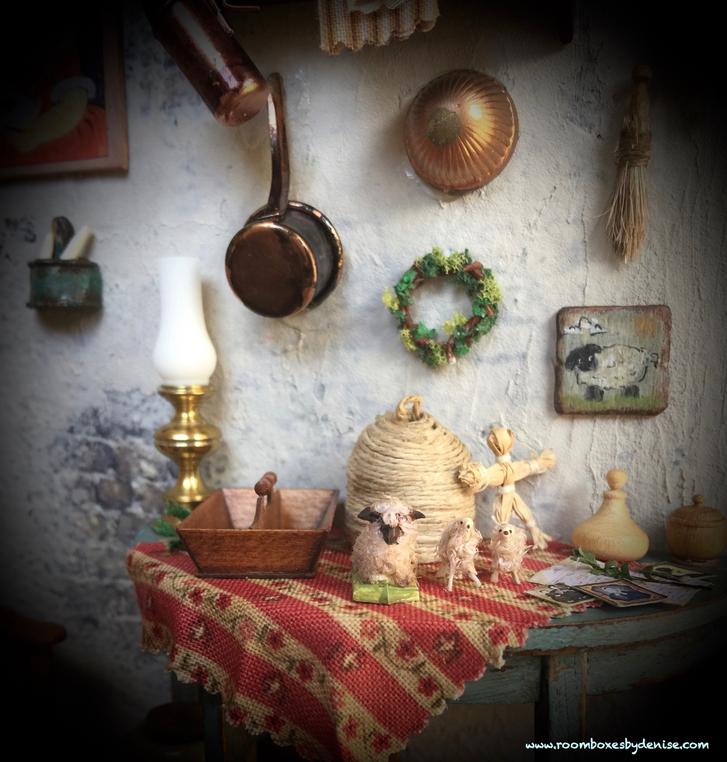 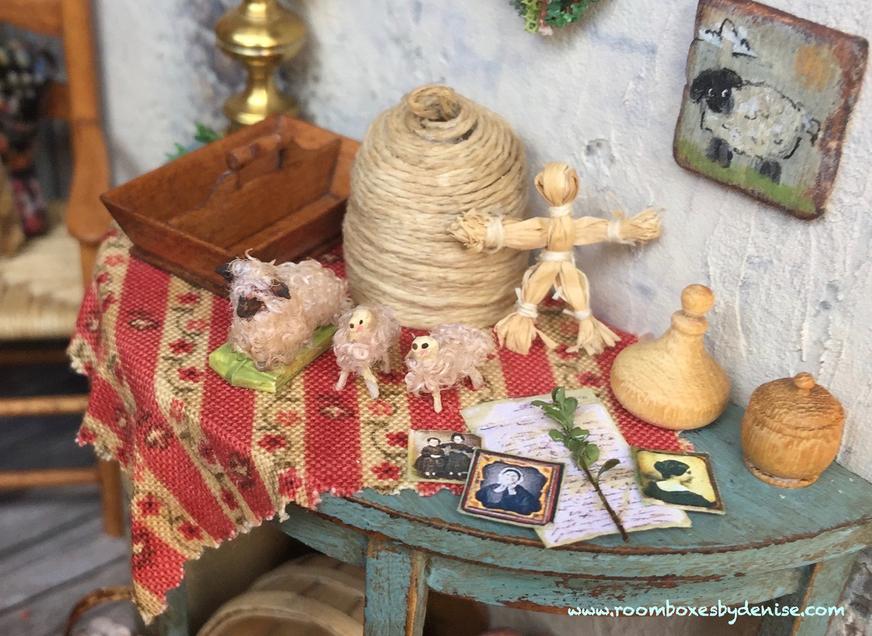 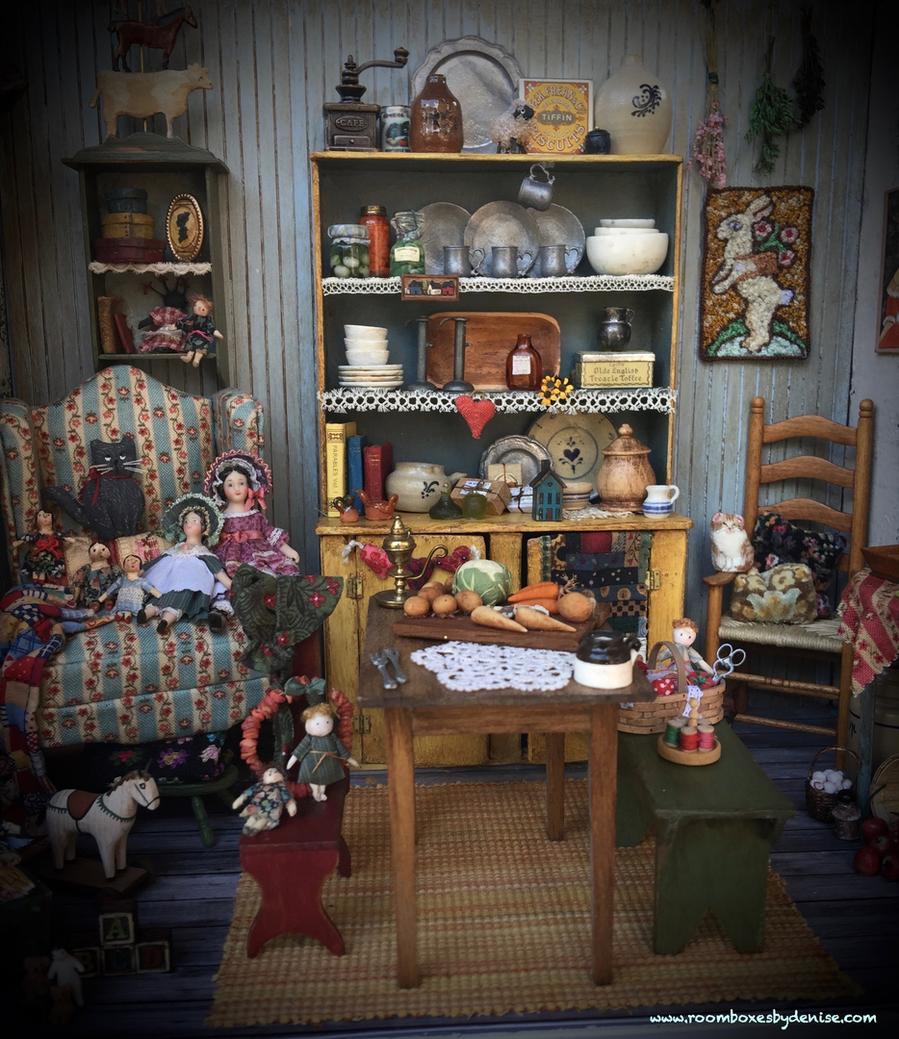 This box holds several miniatures that I purchased at shows in the late 80's or 90's. I will note the pieces that I remember who the artisan was or I could recognize the initials on the bottom of the miniature. 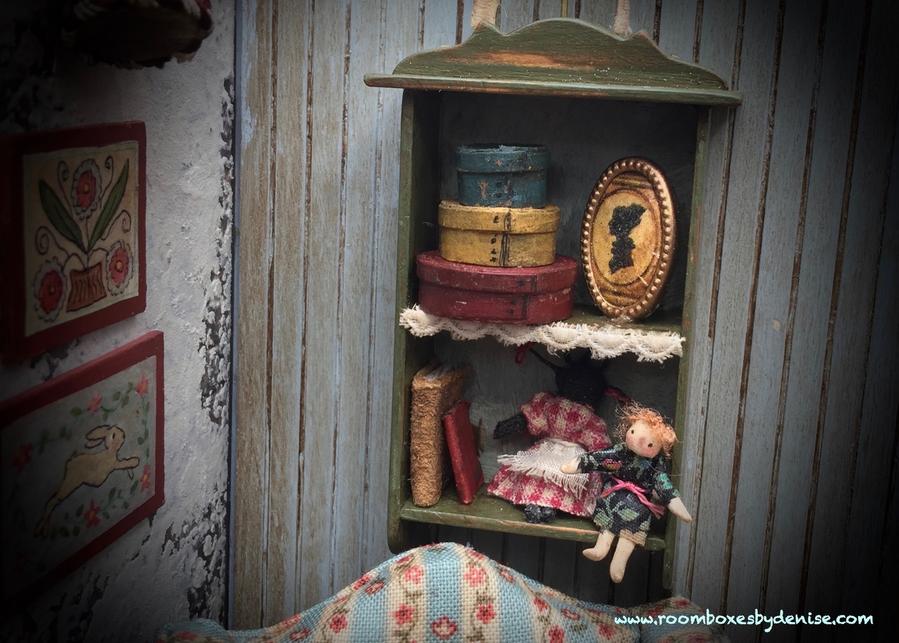 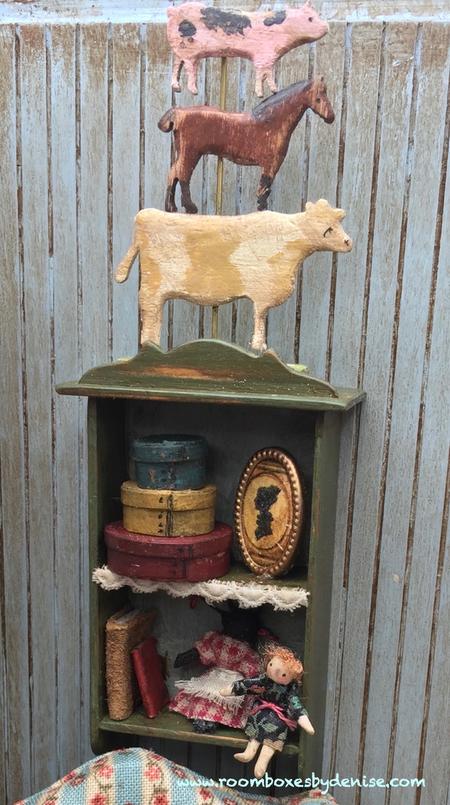 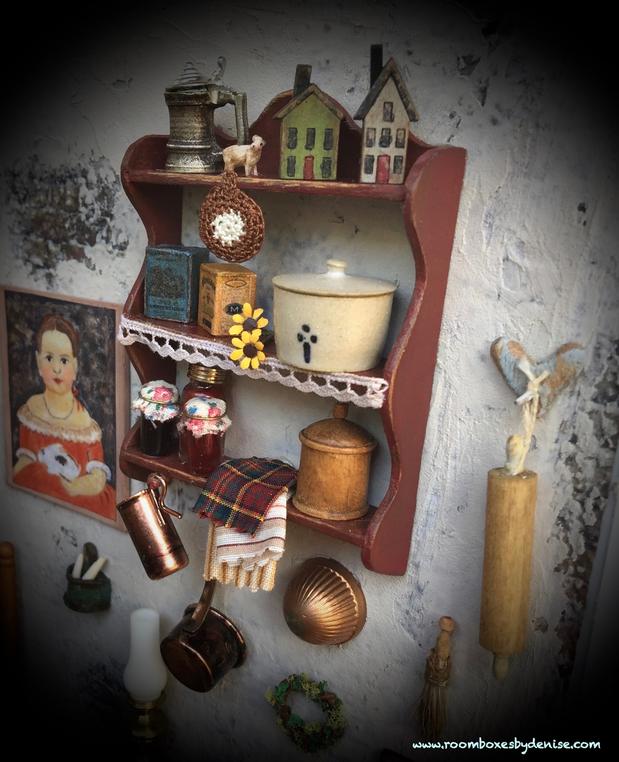 The wonderful antique pull toy horse was made by David Krupick.  I made molds of my very tiny wooden peg doll and filled the molds with air dry clay; then painted the clay dolls with chalk paint and brown wax as the final layer. The African-American doll was made with chocolate-colored Japanese Mermaid air dry clay.

A prairie-style bonnet hangs on the top of a primitive stool/chair with a dried apple wreath, made by a dear friend, and two rag dolls made out of air dry clay.

All of the pewter plates are metal minis that I painted first, with silver and then, dark brown alcohol inks to make them looked aged.  The stoneware crock on the top shelf was made by Butt Hinge Pottery.  The stoneware plate, resting against the back of the hutch in the lower right side, was signed by Jane Graber. I took my white ceramic plates that I had in my stash and wiped a brown alcohol ink on them to give them an aged Ironstone look.  The rectangular wooden bowl in the center was signed Cindy Mallon.  The pewter candlesticks were made by Olde Mountain Miniatures.  The black-eyed susans were extra flowers I had after taking a class with Sandra Manring. 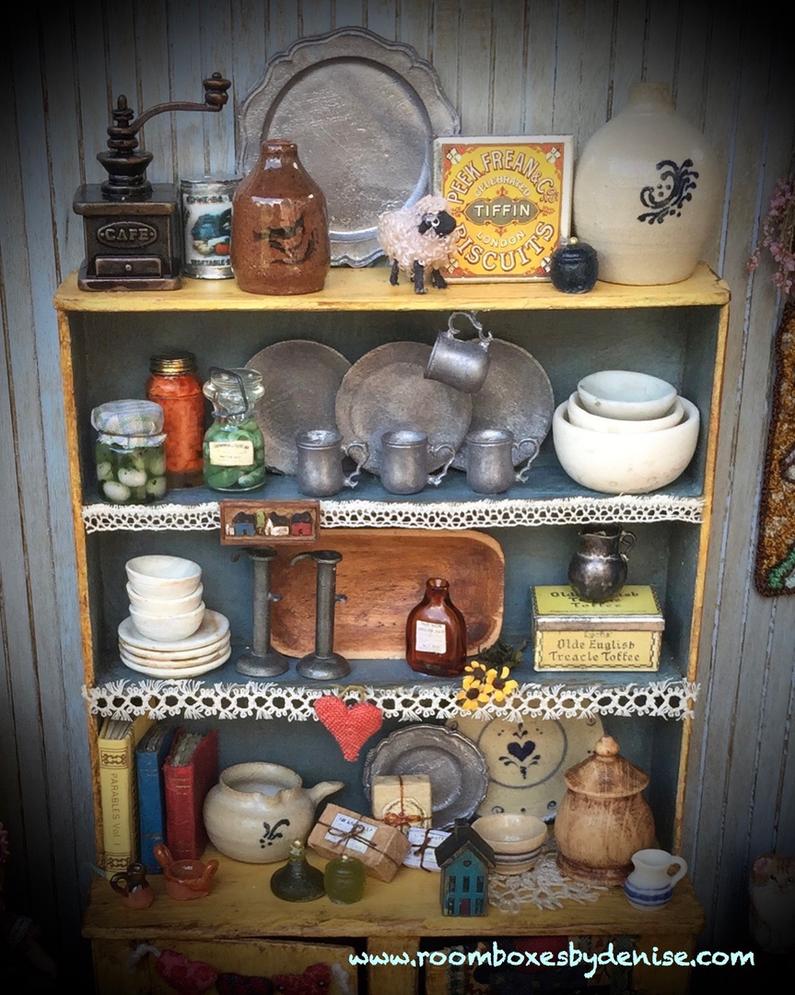 Here is how I cheated to make this Early American portrait look like a real painting:  I printed a Sturtevant J. Hamblin portrait of a girl with her bunny. Then I took my chalk paints and mixed colors to paint over the original painting, for example, matching colors for her dress or her skin. I put highlight dots for the eyes and black dots for the pupils. I blotted a mixture of different colored tans and browns to give texture to the background of the picture.  I used colored pencils and chalks to deepen the color. Finally, I textured matte Mod Podge on the top to give it that oil- painted look and glued it to a chalk-painted rectangular mat board.  Essentially, I put color back into the print because my printer made such a washed out pale looking print. 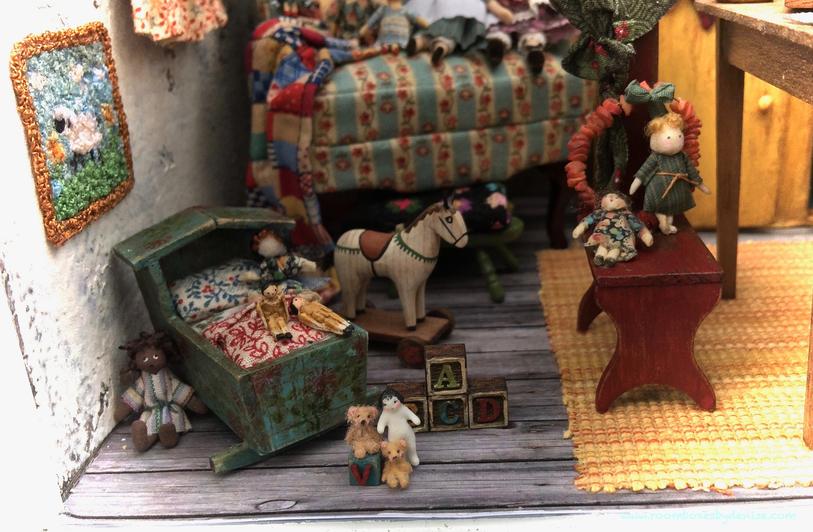 The photo above and the one below are the only two that show the ceiling of the box.  The wood carved ceiling beams (made from balsa) give the box a cosy country cabin feel.  All of the other photos have been photographed with the top removed so as to give more light to show the detail of the miniatures. 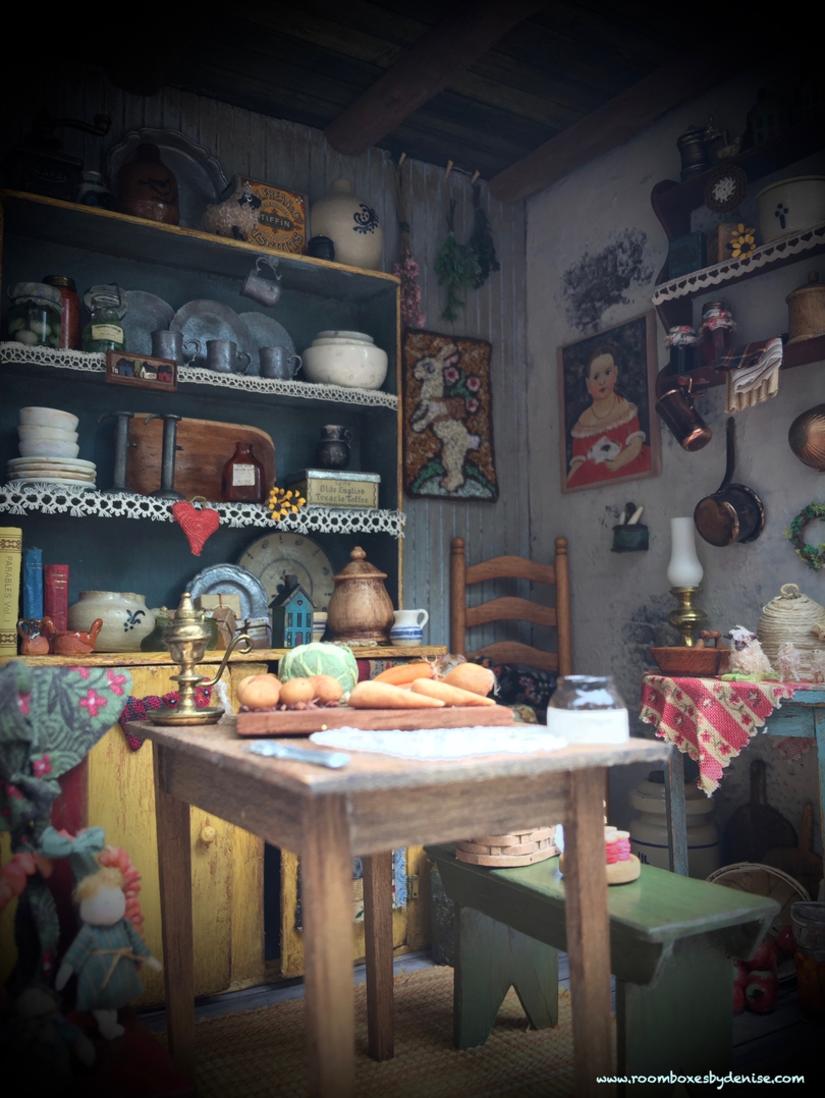 Paulette Svec crocheted the potholder and Nancy Gaiser made the rolling pin. A dear friend of mine and I made the fabric covered jam jars from Lite Brite pegs back in the 80's.  I painted rectangular pieces of wood and then glued what looked like Civil War era labels on them.  The little houses were a kit from Jane Harrop.  Butt Hinge Pottery made the crock and David Krupick made the wood canister. 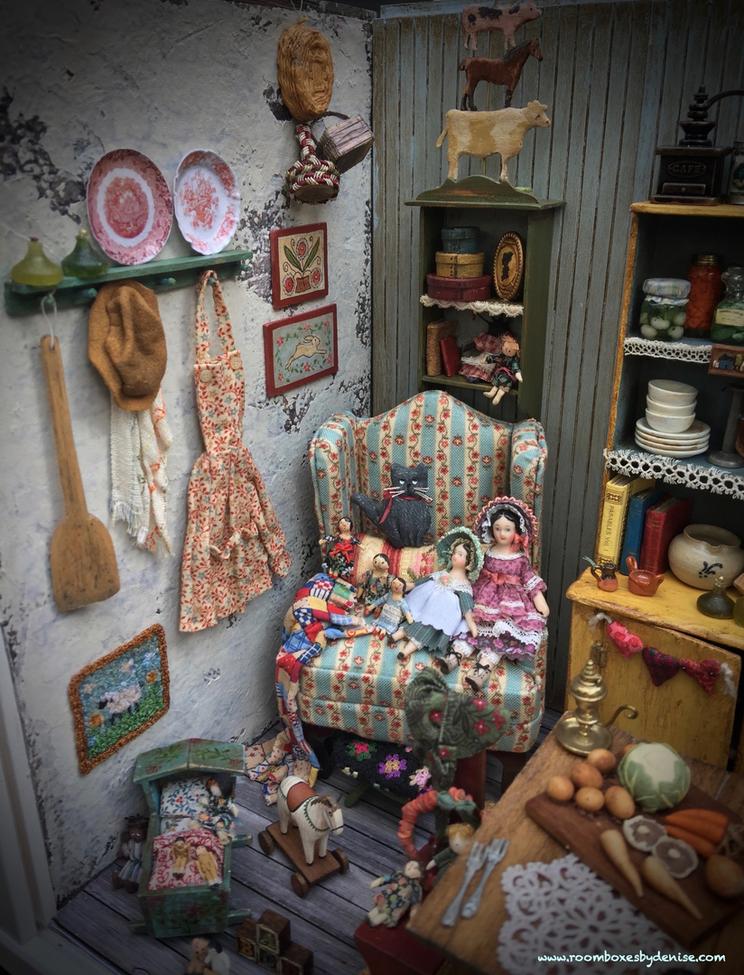 To make the stacked wooden barn animal decoration, I used Studio Calico's wooden veneer farm animal die cut pieces.  I painted them with chalk paint and wax and glued them onto a small brass wire which was then glued into rectangular "woodsie" base.

The yellow hutch was made from a kit by Minjo McKinney at a Houston Area Miniature Guild fun day back in the 1980's.  The rushed chair seat in the far back right side was also made at a class at the Guild.  I remembered struggling to make the rushed seat look perfect. Of course, it never did, but little did I know at the time that it would not have mattered much because the chair seat was going to be covered with miniatures, in this case, flowered velvet pillows.  The white fabric painted tabby on the chair arm was by Mary Hoot. The stained kitchen table was received as a gift at the Guild day and was signed by Sandra Manring. 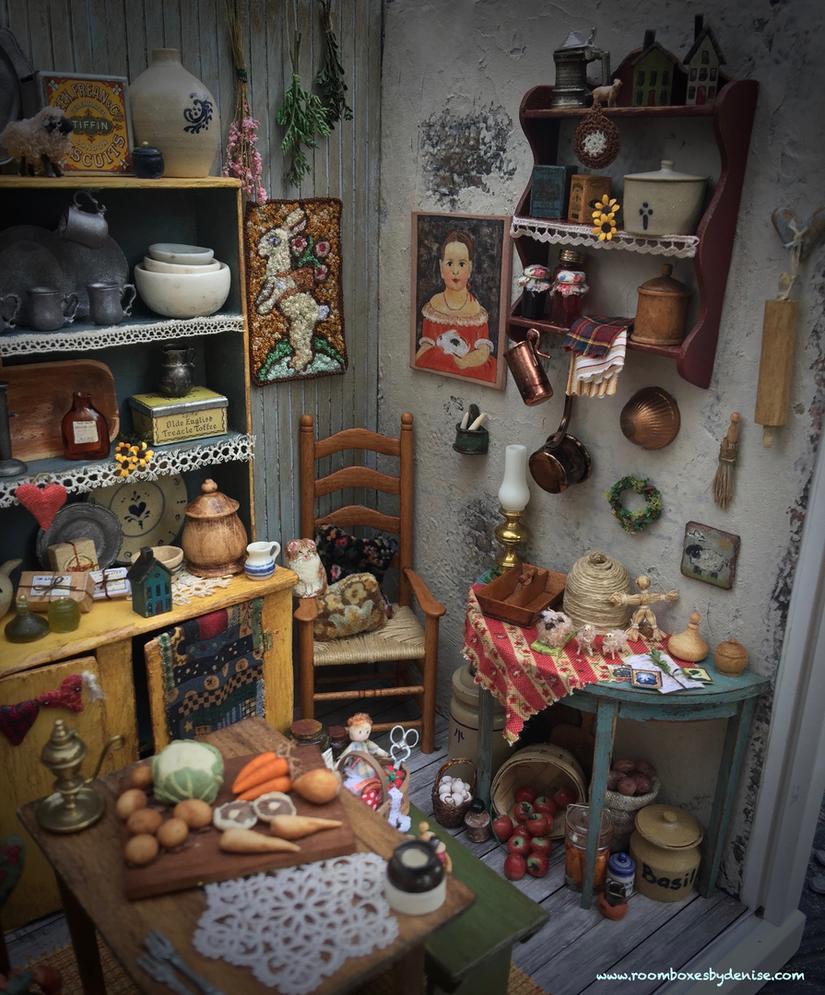 This Al Chandronnait gathering basket is filled with sewing items including a tomato pin cushion, "stuffed" fabric hearts and rag doll, "wood" buttons, ball of yarn, scissors, measuring tape, fabric and lace.  The spool holder was made out of a wooden button, a carved toothpick, and spools of thread made from tiny wood turnings.

On the left, the slim shelf holds two bottles that are made with ultrafast epoxy cement.  I first made a mold of the wooden bottle, (seen in another part of the box), originally made by David Krupick, then filled the mold with the epoxy cement that had been mixed with a drop of alcohol ink.  Here is a tip in making a mold of the bottle-----stand the bottle flat on your desktop, then cover from top to bottom of the bottle with the molding putty.  Then cover the first layer of molding putty with a second one. This makes for a firmer mold.  Let the layers cure undisturbed on your desktop and when done you can fill it with the colored epoxy cement. 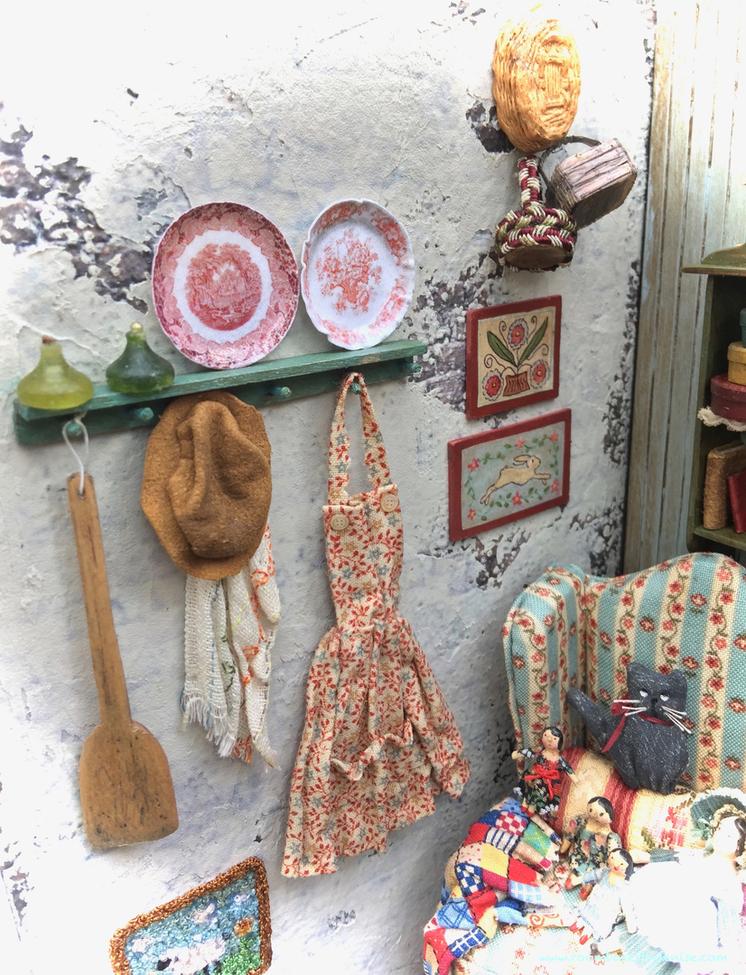